April 21st was going to be my first shot at walking 60 holes this year (I’m currently 60).  The weather forecast fell into the acceptable range, high in the upper 70’s and winds 15 mph or less, so I decided to go for it. The car was packed the night before with clubs, 2 pair of shoes, multiple pairs of socks, change of clothes, water and various food items.

The morning was cool and partly cloudy.  I had talked to the Pro Shop the previous day and was cleared to tee off at 6:45, the first one out.  It was an anxious moment as I headed to the first tee.  Many thoughts were running through my head – What if I can’t make 60 after telling friends and family my plans?  What if I run out of daylight?  But this was something I had planned for almost two years, and I was resolved to just do it. After a short wait for a fairway mower to clear (the first of many mowers I’d wait for that morning), and a couple of quick practice swings, I was off with a high weak drive down the right side of the fairway.

I decided to play the back tees for the first round and the regular men’s tees the rest of the way.  Besides providing a somewhat different look the next time around, it mentally and physically made things seem easier. The course is a par 70 that plays 6,736 yards from the tips and 6,211 from the men’s tees. It is not long, but not short either.

I was unaware that the greens had been aerated and sanded the day before.  Surprisingly it didn’t affect the speed, but there were some strange breaks at times, which didn’t help my putting.

Since this was the “speed round”, I took little time preparing and hitting shots and it showed.  Even though I wasn’t playing for score, I was still keeping it, just to see how many strokes I made during the day.  I started with 4 bogeys followed by a double.  But then a good short pitch set me up for a birdie on the 6th (the first of three I would have on that hole) followed by 3 more pars including one at the #1 handicap hole which is a difficult par 4 where the tee shot and second shot must carry a 40 foot ravine.

I checked my phone for the time, 7:50, an hour and 5 minutes for the first 9, which was much better than expected.  The second nine was fairly uneventful other than my only lost ball of the day, a decent tee shot on 15 into the morning sun that careened off a power line, strung across the fairway about 75 yards from the tee, to parts unknown.

Another check of the phone at the end of the 18 and it was 9AM. I played round one in 2 hours 15 minutes.  My speed round was indeed that.  I felt relieved, and invigorated at the same time.  I wanted to keep going and ride the energy from my enthusiasm.  It was time to play the extra holes I would need for 60 so I quickly went back to the 10th tee and played a six hole loop which finished on 18. I played a ridiculously fun hole during that loop, hitting my putter for the tee shot and putting with my driver.   Made a bogey there.

It was now 10am, and I had already played 24 holes.  Just 36 to go . . . just?!?!  I went back to the first tee after changing my shoes and socks, still riding a high at my progress. At 10:15 I teed off, playing with a very friendly retired high school coach.  The first 9 was solid, I was finally starting to swing well.  I think the rush and nervousness of the first 18 had my swing out of sync initially.  But on the 10th hole I finally started to feel it.  My legs were getting rubbery and I had to throw my hips forward rather than let the legs drive through on shots.  I started playing for fades and slices.  It was time for a rest.  I did have a fun hole during that period playing the 12th without shoes (again a bogey). Then suddenly on 17 everything came back.  I birdied it and almost birdied 18.  I was back on a high and energized.  It was now 1:20pm and I had played 42 holes.

I had been eating snacks throughout the morning, mainly fig bars and trail mix, but something more substantial was now in order.  I had a sandwich in the clubhouse, changed from long pants to shorts and put on fresh socks.  Not wanting to stiffen up and still excited about the last 2 holes, I headed to the first tee for the final round.  By now the wind was around 15 mph and it was in the high 70’s with a clear sky. This time I paired up with a businessman who had a dry sense of humor and was playing hooky for the afternoon.

The first tee shot was weak slice, which made me think I was back to needing to force the hips forward.  A pulled second, a chip and 2 putts gave me a bogey.  Little did I know, that would be the last over par hole of the day.  A crisp 5 iron on the next hole to 5 feet, and I was in the zone.  Even though I missed the putt (must have been the greens, couldn’t have been my yips), I no longer worried about my game.  I hit 15 of the last 17 greens, including a par 5 in two and got up and down for pars on the other 2.  I can honestly say I have never played an easier 18 holes of golf in my life.  An even par 70, my best score on that course by 3 shots.

Ironically, I felt like there was enough gas in the tank for another 9, but that could have just been an illusion.  The businessman took the photo below when we completed our round. 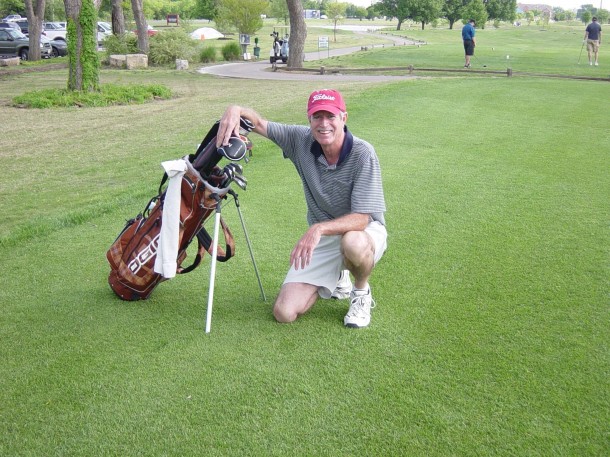 Russ Seale after finishing 60 holes in one day

Play as much as you can early.  When you hit the wall (and you will at some point) stop and rest, even if it’s between 9’s.

Change you socks between each round – it is refreshing.

Hit lots of punch shots or three quarter shots.  Not only will it take less energy, but you’ll hit more solid shots with less effort.

Don’t worry about score.   The last round, normally I would have been nervous about shooting such a score, but my goal was to finish 60, so hitting good shots just meant I had to hit less of them.  I didn’t even think about score until the last couple of holes. I must admit a one under 69 would have been the ultimate.

When you are tired and your mind shuts off – ie) no swing thoughts – you may play the best golf of your life.

Play with someone positive and fun after the speed round.  Laughter and good conversation can help keep your mind off bad shots and tired muscles.

Reward yourself.  I had a pizza and a couple of glasses of my favorite wine after the round.

Aleve is wonderful.  I took one first thing in the morning and another before the last round.  No soreness (at least that day).

Last, but not least, IT CAN BE DONE.  I’m no superman and don’t do any special exercises.  I have been walking 27 the last couple of months, but I only play once a week as a general rule.  If you are in reasonable shape and are mentally tough, you can walk 40, 50, 60 or more.  My son and I are already making plans for my 70 at 70 in Scotland where it’s light for 18+ hours in the summer.